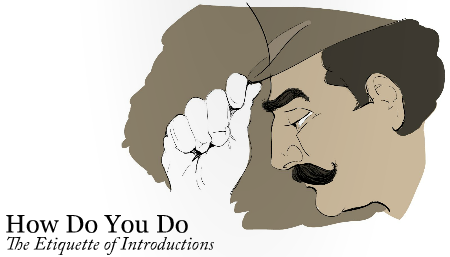 The importance of an introduction is simple; it brings people together by providing social context. The objective is to provide ease amongst strangers. Let us discuss how proper introductions are made.

Determine the person of honor

The first step in making introductions is to determine who should be introduced to whom. Basic protocol calls for speaking first to the person you wish to honor. The person who is named first is being shown a degree of respect or deference and is having the introduction made to them.

A person of high rank or special prominence is named first and receives the introduction. The lesser rank is introduced to them.

With that hierarchy in mind, once you have established whom you wish to honor, you are ready to make the introduction.

Firstly, say the name of the person of honor and look at them. Unless you are in an informal setting, introductions should be made using first and last names, as well as titles such as “Dr.” when appropriate. Note that you should always stand for introductions.

Then, state the name of the person being introduced.

Finally, add a snippet of information about each person so they will know why they are being introduced and will have information with which to start a conversation.

In a group setting, you should introduce a person to the group first. For example, “Alice, these are my friends Katherine, Lindsay, Sallie, and Kristin. Everyone, this is Alice.”

At some point, everyone forgets a name or title. If this happens to you, politely explain that you have had a brief memory lapse. It is more polite and less awkward to simply acknowledge the fact than to avoid an introduction. Apologize and move on.

If you are in a situation with others and no one attempts to introduce you wait for a pause in the conversation, extend your hand and simply introduce yourself.

You will find that the ability to make proper introductions will prove useful in both professional and social settings. Fortunately, making them gets easier with practice. Do not worry about making small mistakes-just remembering to make introductions will set you apart from the rest.